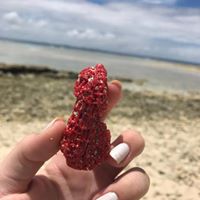 DO YOU KNOW WHAT AN ORGAN PIPE IS?

Organ Pipe is also a type of CORAL that grows in our Great Barrier Reef. It has quite unique actually. It is the only coral that retains its colour after it dies. On our walks around the island we often see vivid red fragments of this beautiful, red coral skeleton.

Tubipora music – there’s that musical reference to the actual organ pipe – Organ Pipe Coral forms in colonies of parallel, vertical tubes connected by horizontal platforms. The polyps live in the uppermost part of the tubes and come out to feed during the day. You’d think with such a beautifully coloured outer “house”,  that the polyps would be colourful as well? Nope, they are boring whites and creams. We never see this while we snorkel as while the polyps are out they cover the striking red skeleton.

Now, you know that we have hard corals and soft corals in the Great Barrier Reef right? Guess which one this.

It’s a SOFT coral that just happens to have  a calcium carbonate outer skeleton that forms just like the pipes on of an organ.

The Organ Pipe Coral, because of its red calcareous skeleton, has long been prized for jewellery and decorative ornaments since ancient times. Even a tiara was made from it in the mid 19th Century by Phillips Bros, London. This was a company well known for its distinctive coral jewellery and In 1870 the firm advertised that it had ‘the most complete collection of fine coral work in the world’.

Back in the “old days” the Organ Pipe Coral was believed to save children from illness, promote fertility and protect against witchcraft as well.